It’s been a strange day at the office and it’s only 9am.

Tom has fled to the basement to escape the end of the world. On the first floor, Vivian makes the mistake of saying what all the women in the office were already thinking. Randy’s smoking dope on 2, Farrah’s waterboarding Yuri on 7 and the toilet explodes on 4.

In spite of looming coyotes and apocalyptic billboards, everyone does their best to get through another day. Life is short, after all – whether or not the world’s actually ending.

This world premiere comedy by up and coming playwright Rachel Bonds explores the relationships we take most for granted – those with whom we work every day – and asks us how well we know the people we share a break room – and maybe even a lifetime – with.

Her plays include: Curve of Departure, a commission from South Coast Rep, soon to be workshopped at the 2016 Pacific Playwrights Festival with Mike Donahue; Five Mile Lake, winner of the 2013 L. Arnold Weissberger Award from the Williamstown Theatre Festival, which received its world premiere at South Coast Rep, directed by Daniella Topol, and its east coast premiere at The McCarter in May 2015, directed by Emily Mann; ###emBonds is an Alumna of EST’s Youngblood, Ars Nova’s Play Group and New Georges’ The Jam. She was the Fr. William Ralston Fellow at the 2011 Sewanee Writers’ Conference and a member of SPACE on Ryder Farm’s 2014 Working Farm Writers’ Group. She is currently working on commissions for South Coast Rep and The McCarter. Bonds has served as a Volunteer at the 52nd Street Project and as a dramaturg for the 2015 Young Playwrights Conference in NYC. Rachel was recently named the 2016 Tow Foundation Playwright in Residence at Ars Nova. She is a graduate of Brown University. 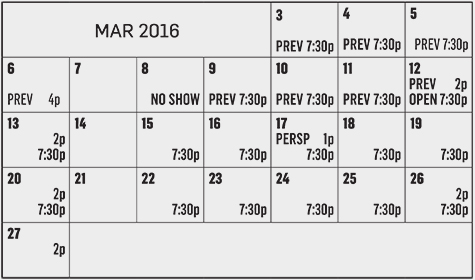