Twin sisters “M” and “L” care about two things in this world: academic ambition, and each other. But when M’s supposed shoo-in slot at a prestigious university is given to someone else, the sisters begin to strategize how to secure their success by any means necessary. Taking a page from a certain Scottish tragedy, the sisters' sinister scheming leads to bloody extracurricular activities that could take them to the top. Jiehae Park’s new dark comedy is a savage satire on academia, teenagers and race, and made The Kilroys’ 2015 List of the best new plays by female playwrights.

Fresh off a critically acclaimed World Premiere production at Yale Repertory in the  15-16 season, MTC is excited to bring this sinister twist on the Scottish Play to the West Coast under the direction of Margot Bordelon, who also directed the play’s world premiere. Another of Park’s plays, Hannah and the Dread Gazebo, won the Princess Grace Award, the Leah Ryan Prize, and landed on the first annual Kilroys List, and will receive its world premiere in March 2017 at the Oregon Shakespeare Festival. 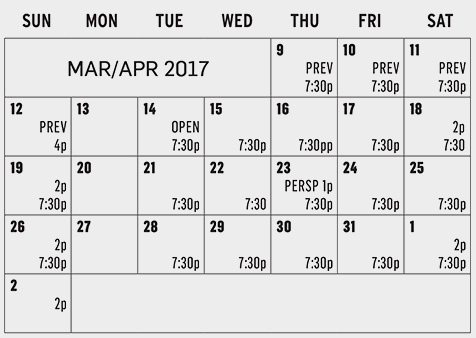 Discounts and special rates available only by calling or visiting the Box Office in person: (415) 388-5208
Promo Codes distributed for online redemption subject to availability.
Only ONE (1) Promo Code will be valid per order.
Promo Codes do not apply to Best Deal ($25) tickets.