by Heather Raffo
In Association with Golden Thread Productions

Eight years after fleeing their home in Iraq, Noura and her family celebrate Christmas, and their new life, in New York City. But when the arrival of a visitor stirs up long-buried memories, Noura and her husband are forced to confront the cost of their choices; the past they left behind. Inspired by stories from Arab-American women and created in response to Ibsen’s A Doll’s House, Heather Raffo’s Noura charts the intricate pathways of motherhood and marriage—and the fragile architecture of what we call home.

“I am most excited to be in conversations with Marin audiences about their views of belonging, individual identity and the architecture of what they call home. As the characters of Noura attempt to balance their individual pursuits with a search for community, I believe it is quite possibly a balance with which many of us struggle.” — Heather Raffo

Run time is approximately 1 hour and 40 minutes with no intermission.

Special effects advisories: This production features the use of herbal cigarettes and simulated gunshots.

MTC provides advisories for each production regarding special effects that may affect patron health and physical sensitivities as necessary. MTC does not provide advisories relating to content, because content sensitivities vary from patron to patron. If you have questions about content, please contact the box office prior to purchasing your tickets as we do not offer refunds to patrons who choose not to see a show based on subject matter. 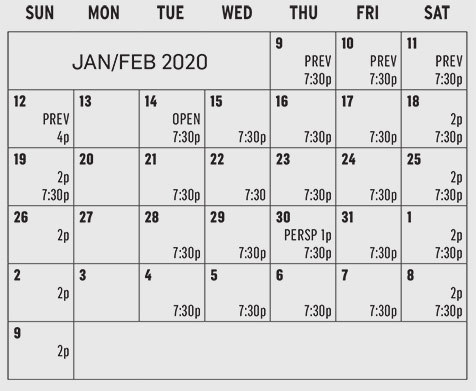 Phone & online orders subject to a $6 fee per order.

Tickets are subject to resale starting 5 minutes before curtain. Late seating is based on available seats.

Only one promotional code can be used per order, and cannot be combined with any other discounts or offers.

Promo codes can be used when purchasing tickets online, or when mentioned to the Box Office associate over the phone or in person at the MTC Box Office counter.

PromoGeneral priced tickets ONLY, so be sure to select the General price type after selecting your preferred seats online.

If purchasing tickets online, type your promo after selecting your seats and price type. The system is case sensitive so if the code you're given is in all-caps, make sure it is entered in all-caps!

If you don't see the discount applied in your cart at checkout, please contact the Box Office before confirming your payment as refunds will not be issued for failed web applications.