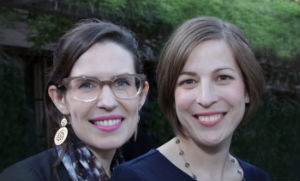 By Lauren Gunderson, co-author of Miss Bennet: Christmas at Pemberley

As a kid, I met Jane Austen first through her biography, not through her fiction. She was an example to me of a woman who trusted her talent and vision, despite the fact that most women were not allowed to work outside the home or have many thoughts of their own. But she knew she could write. She knew she could make people laugh and drive their attention to an ultimate reveal. She was talented and she wasn’t letting her imagination fade away unspent.

Jane Austen didn't become the household name she is now by herself, which is another reason I admire her. During her lifetime, almost no one but her family and a few cranky publishers even knew that she was a writer. When her first stories were published, they were attributed pseudonymously to "A Lady." Her brother encouraged her—and found publishers for her work—both while she was alive and after she died too early at 40. And it was her brother who let the world know that the books they admired were by his late sister, Jane. She had talent, yes, but she also had allies.

Interestingly, her life didn't play out like one of her stories. She never married, unlike almost all of her heroines. The great love story of her life didn't come to fruition in the same way as Lizzie and Darcy or Anne and Captain Wentworth. But she had great love in her family, who were her champions, confidantes, and friends. In this way, her books aren't as feminist as her life. She didn't need or seemingly desire the kind of matrimonial capstone that her books required. Or perhaps she just took her own advice and wouldn't marry without true affection. And isn't that the most feminist advice of all?

Her stories also taught me which characters were worthy of being heroines—and it's not always queens and warriors. In fact, Jane Austen and Chekhov have a lot in common; they both told unforgettable stories, not of the lives of kings and armies, but of the intimate decision-making among families that sends ripples throughout their lives, creating waves of drama. Jane Austen did this by zooming in on and invigorating the everyday relationships, desires, and dreams of women with the fine wit and gravity such things deserve. With nowhere near as many options as men, a woman's choice of husband was the critical and fortune-defining moment of a woman's life. Austen saw in that predicament a universal truth, and gave us stories that still resonate today. Chekhov thought he was writing comedy; Jane Austen actually did.

As a young writer, I admired Austen’s life as a writer as much as I admired her stories, with their unstoppable humor and literary observation. She wrote with grace and sharpness. She was funny and kind, romantic and wise, astute and fanciful, and put women at the center of timeless literature. She taught me that I could be and do the same.