“Alive with humor, surprising in
its turns, and terribly haunting”

It’s 2062, the age of artificial intelligence, and 85-year-old Marjorie — a jumble of disparate, fading memories — has a handsome new companion who’s programmed to feed the story of her life back to her. What would we remember, and what would we forget, if given the chance? In this richly spare, wondrous new play, Jordan Harrison explores the mysteries of human identity and the limits — if any — of what technology can replace.

Jordan Harrison was a 2015 Pulitzer Prize finalist for Marjorie Prime, which premiered at the Mark Taper Forum and had its New York premiere at Playwrights Horizons. Harrison is also the recipient of a Guggenheim Fellowship, a Hodder Fellowship, the Horton Foote Prize, the Kesselring Prize, the Roe Green Award from Cleveland Play House, the Heideman Award, a Theater Masters Innovative Playwright Award, the Loewe Award for Musical Theater, Jerome and McKnight Fellowships, a NYSCA grant, and an NEA/TCG Residency with The Empty Space Theater.

MTC provides advisories for each production regarding special effects—when applicable—that may affect patron health and physical sensitivities. MTC does not provide advisories relating to content, because content sensitivities vary from patron to patron. If you have questions about content, please contact the box office prior to purchasing your tickets as we do not offer refunds to patrons who choose not to see a show based on subject matter. 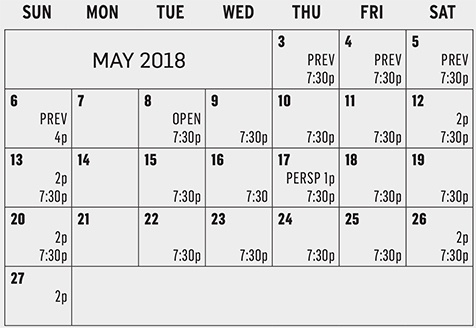 Military and Under 30 discounts and special group rates available only by calling or visiting the Box Office in person: (415) 388-5208.